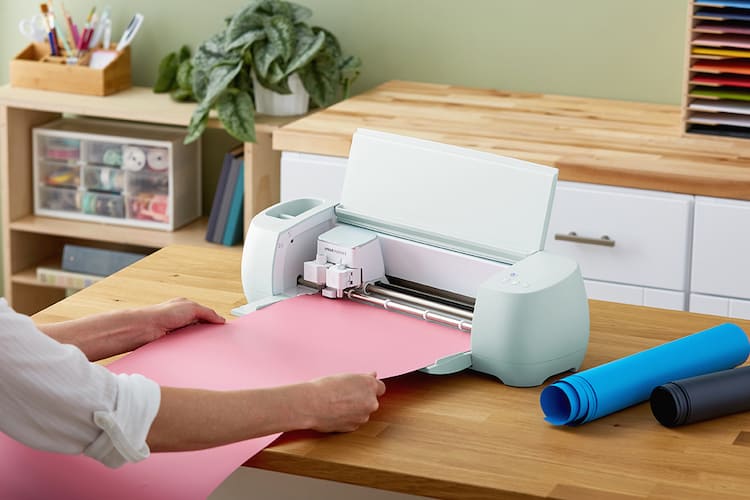 This is a great year for vinyl cutting machines and anyone who’s into DIY crafts or looking to start a business in this field.

When the Silhouette Cameo 4 was released in the last few years it was slightly ahead of the Cricut Maker.

Therefore, it comes as no surprise that due to the heated competition between Silhouette and Cricut, that Cricut would not follow and release a rival vinyl cutting machine!

So, let’s find out how the two flagship vinyl cutters from these industry-leading manufacturers compare against each other in our Silhouette Cameo 4 vs. Cricut Maker 3 comparison guide.

Silhouette has always had a slight edge in user-friendliness, except when it came to its design software.

The Silhouette Cameo 4 has resolved most of the kinks in the software while also introducing an automatic tool detection function and single-tap operations.

For the first time, Silhouette might just have wrestled the edge from Cricut (and not just in the performance department as you will notice later on in this article).

The Cameo 4 is so much more user-friendly and much easier to use than the Cameo 3.

Cricut Maker 3 Ease of Use

As Cricut’s ultimate vinyl cutter, the Maker 3 is one highly versatile machine. It can tackle lots of materials, cutting patterns, and designs, all with consummate power and speed. But all this means that it has a learning curve.

Not only that but it requires you to make various adjustments based on the tools and materials in use. Regardless, we are major fans of the beautiful Cricut Maker 3 Cutting Machine.

Click here to check the price of the Cricut Maker 3

Sick of trailing far behind Cricut in this arena, the Silhouette Cameo 4 comes with 5kg of downward force. It’s a significant improvement for the Cameo line.

The Cricut Maker 3 is known as a reliable workhorse that can tackle a wide range of materials thanks to its 4kg of force. With that in mind, this is the first time that Silhouette has come up with something more powerful in the Cameo 4.

Although the Cameo 4 is three times faster than its predecessor, with the new and improved algorithms on the Cameo 4, the Cricut Maker and Cameo 4 are on the same level.

This is where the Cricut Maker 3 is really making a difference. While the Cameo 4 previously outshined all Cricut vinyl cutting machines in terms of its maximum cutting size, the new cutting length of up to 12 feet means that the Cricut Maker 3 has just gotten the edge.

With the improved speed and cutting capacity, this puts the Cricut Maker 3 in front in two important categories.

Do you always need a large cutting size? No. But it is nice to have as an option. You will soon find out why the maximum cutting size might not be a deal-breaker after all.

When it comes to tools, the Cricut Maker 3 still has the advantage. It has five cutting tools as opposed to three with the Cameo 4.

Both machines have rotary blades but the Cricut Maker 3 has a fine-point blade and deep-point blade that can make all the difference in more intricate projects.

One thing worth mentioning is the weeding tool that comes with the Cameo 4.

This marks and lets you see exactly where to start removing unwanted vinyl from your cuts. It’s something that the Cricut Maker 3 can’t do and neither did the previous Cameo vinyl cutters.

It’s not just very useful but almost essential in the hands of a beginner. It takes ease of use to another level and smooths over the learning process — not just on how to use a vinyl cutter but also on how crafts should be done in general.

Comparison in Ability to Cut Matless

Being able to cut without the use of a mat has been a great feature of the Cameo 4.

Cricut released this capability with their small and compact Cricut Joy so it was only a matter of time before they added this feature to any new products they released.

The Cricut Maker 3 is now able to cut without the use of a mat when using Smart Materials. This is a great feature especially for those who create large-scale projects.

Pricing of the Maker 3 vs Cameo 4

The Cricut Maker 3 retails for $399 which is typically around $100 more expensive than the Cameo 4 which retails at $299.

You can also save some money by purchasing a bundle of goodies. Find the Cricut Maker 3 bundles here and the Cameo 4 bundles here.

Cricut Maker 3 vs. Silhouette Cameo 4: Which is Better?

It depends on your definition of “better.” The Cameo 4 is clearly cheaper, equally capable in cutting power and speed and equipped with a very intuitive touch panel. It has a good selection of tools, a low learning curve, and lots more.

With the new and improved cutting size, speed, and matless cutting when using Smart Materials, the Cricut Maker 3 does come with a higher price.

The Cricut Maker 3 is capable of using more tools though which will always equal more versatility.

It’s also a machine that has been proven to work with fabrics and thicker materials. The Cameo 4 still has a long way to go to prove that everything in real life is as good as it looks on paper.

Which One Should You Get?

It all comes down to what you need and at what stage you are in your crafting business.

If you already own a Cricut Maker and you’ve been using it successfully for years and do not necessarily have a need for the larger cutting capacity then it is unlikely that the extra kilogram of force that the Cameo 4 has will have any appreciable effect on your output.

However, if you’re buying your first machine or if you’re ready to scale up production and work with larger cutting sizes, then the Cricut Maker 3 is almost a no-brainer.

Previously we would say that the Cameo 4 matches or exceeds the Cricut Maker (except for the few extra tools) in nearly all categories.

However, with the new and improved cutting capacity and speed when using Smart Materials, the Cricut Maker 3 is proving to be a difficult vinyl cutting machine to beat.

Therefore, the Cricut Maker 3 is perhaps the best DIY vinyl cutting machine you can get for your money, one that can handle just about any projects, big or small.

And, just because it may not make financial sense to make a switch in some cases, it doesn’t take anything away from its performance and quality.